ACT one piece of the puzzle in determining academic future 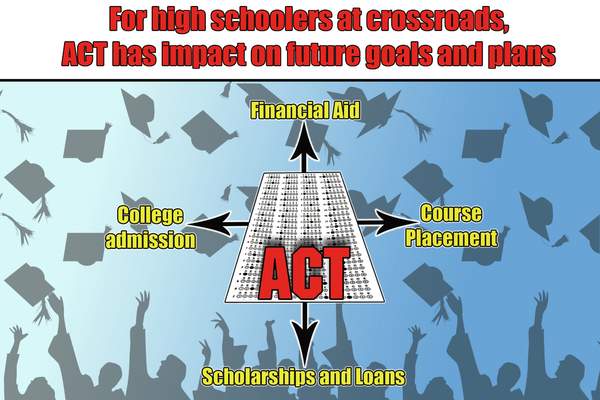 The ACT, which originally stood for American College Testing, is a test that every high school junior and senior knows all too well; however, often questioned is whether the ACT’s effectiveness in measuring knowledge and aptitude is equal to the numerous effects it has in a young student’s life.

Since its creation, the ACT has played a significant role in education. According to Wendy Johnson, Director of Admissions and Student Activities at Southern State Community College, the ACT is “part of the puzzle.”

Similarly, Deborah Mangus, counselor at Fairfield High School, said the ACT is “one part of the admission package.”

The importance of the ACT was also echoed by McClain High School principal Jason Potts. “Futures are affected,” he said, “when students do not meet the required ACT cutoff for particular colleges and/or programs.”

In addition, Potts said, “I believe that the ACT is a good indicator for college readiness because it measures a student’s ability to process information and compute, two skills that are requisite for all academic pursuits.”

Though the ACT’s measurements are effective and its influence extensive, the weight it actually has in higher education can vary.

For example, Southern State, as an open enrollment institution, does not require an ACT score during the admission process. Yet, according to Johnson, the ACT score can still be a useful measurement.

It can be used, Johnson said, “for placement purposes.”

Also, according to Potts, “College scholarship money is directly connected to ACT performance.”

In addition to college admission, course placement, and scholarships, the ACT score can also affect academic advising and loan attainment, according to the official ACT website.

Also according to the official website, the ACT affects over 1.6 million high school graduates annually, indicating the test’s influence is as broad as it is deep.

“It’s a part of the process for a four year college,” Mangus said.

However, despite its many effects, the ACT is just one of many factors that affect academic achievement.

Though an ACT test score can sometimes predict college success, Johnson said, it does not always correlate with accomplishment.

“It’s just an indicator,” she said. “Some students test well, some show their metal there.”

Other students, she said, may not take it seriously, causing their performance to be unequal to their potential.

“Students hear their teachers describe the test,” he said, “but many do not get serious about what is required of them until they actually take the test.”

And though the ACT can be retaken if students are not satisfied with their score, Johnson said the cost of the test can discourage retakes.

Therefore, according to Johnson, the ACT is not always the best indicator of student performance.

Transcripts, she said, are valuable. “They’re good indicators of persistence,” she said.

In addition, students transferring from Southern State, who have already done well there, can use that achievement to show other colleges and universities their potential. An ACT score, Johnson said, is not always necessary, depending on the institution, if success in an open enrollment college can be shown.

For high schoolers, Mangus and Potts said there are numerous elements that colleges also consider.

Depending on the college, Mangus said, “there are a lot of other factors” that go into consideration, such as community service and work experience.

“From ninth grade on,” she said, “focus on GPA. That’s the best thing they can do.”

College essays, in particular, Potts said are valuable indicators. They show, he said, “not only writing ability, but also character and personality traits.”

And though the ACT is just one part of the whole considered by colleges and universities, its benefits can go beyond test scores.

“Students who take the ACT,” Potts said, “get a snapshot of how their academic preparedness compares to other high school students.”

According to the official website, the test is not only an indicator colleges use when considering applicants, but also a tool that both students and high schools can use for assessment.

Some of the benefits the website lists include: making students visible to colleges and universities they may not have considered, helping students narrow their interests for future plans through its Interest Inventory and Student Profile sections, providing a platform for high schools to evaluate the effectiveness of their instruction, identifying students who may need additional assistance during high school, and initializing changes and improvements in high school curriculums.

The ACT, therefore, with its many possible effects, can trigger stress.

To alleviate that stress, Mangus said practice is essential.

“The more familiar a student is with the format of the test, the better,” she said, adding that many students are not used to timed tests.

In addition, parents can take several steps to help their students prepare for the ACT.

“Give them plenty of opportunities to take it,” Mangus said, adding that the test provides room for improvement.

Also, she said, parents and students should “take advantage of schools that offer practice ACTs.”

In addition, Mangus said parents can choose to receive the test, the student’s answers, and the correct answers in the mail along with student scores. This can be a helpful tool, Mangus said, if students are planning to retake the test.

The release test with answers costs an additional $19.

However, there are many other ways to help students prepare that are more cost-effective. Though there are more expensive options, such as tutors, Mangus also said there are “a lot of options that are reasonable.”

“The most economical way,” Mangus said, is to purchase a practice book through Amazon.” In each book, she said, there are usually four different practice tests.

There are also ways to practice for the test that are cost-free. For example, Mangus said free tests are available on actstudent.org. In addition, many schools offer ACT-related instruction.

Additionally, the official ACT website recommends that taking challenging courses throughout high school is the “best way to prepare.”

Ultimately, working hard during school and practicing for the ACT are the best ways to prepare, not only for the test, but also for all higher education following high school.

In terms of advice for students facing the ACT, Johnson said they should not “stress out about it. It’s just a tool.”

For more information about the ACT, visit www.act.org.