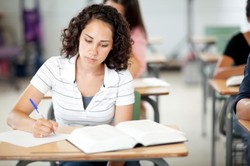 Expect to see both an uptick in online test prep resources and changes to popular exams in 2014.

The world of college test preparation is constantly changing, and 2014 will be no different. The growth of online learning has begun to level the playing field by offering test prep tools to students whose circumstances – financial or otherwise – would have prevented them from accessing such resources in the past.

The tests themselves continue to evolve as well, in attempts to become both more relevant to classroom experiences and more predictive of college performance. There are three important trends to watch for in 2014.

1. Online test prep tools: A common criticism of college admissions tests, such as the SAT and ACT, has always been that the more affluent students were at an inherent advantage over those who are not able to afford test prep or tutoring services.

In recent years, however, numerous free, online test prep resources have appeared and helped to at least mitigate that gap. The College Board provides free, online SAT resources for students, including practice questions and full sample tests.

In addition, there is an abundance of other free websites that provide helpful lessons and tutorials, practice questions and tests, or both.

2. Changes to the SAT and ACT: These two common college entrance exams have both announced fundamental changes to their tests, effective in 2015 and 2016, respectively. While neither “new” test has been officially unveiled, general outlines of the changes have been made public.

As students are typically encouraged to begin preparing for these college entrance exams years in advance, it would be wise to get a head start on the study adjustments that will need to be made to these test prep regimens – particularly since the revised PSAT will be released in 2015.

The SAT will not change its format, but the types of questions offered in each subject section will undergo a transformation. The critical reading vocabulary will shift away from words that seem to be found only on the SAT to include words more relevant to everyday life.

Instead of having to spend time locating and reviewing classic vocabulary lists, students should be able to apply much of what they already know. Of course, they will need to keep an ear out for any potentially new lists or guidance from the test-makers.

The mathematics section will place heavier emphasis on topics that better predict college performance, such as proportional reasoning, linear equations and linear functions. Students should take note of those concepts now and focus more on them when they come up in school.

The writing section will change its primary emphasis from building and supporting an argument to accurately analyzing facts and evidence, thus discouraging students from simply making up facts to argue their point. A great way to gear up for this sort of task is to read more. Students who are consistently reading and subsequently analyzing the content will be better equipped to handle such an assignment on the new SAT.

The ACT will begin to offer an adaptive, computer-based test alongside the traditional paper-and-pencil format. Students taking this electronic test will encounter questions asking them to perform virtual tasks – such as changing the pressure of a gas tank or pouring liquids into virtual beakers – before composing predictive answers based on their experiments.

Students should make sure to pay close attention to similar lab experiments conducted in their science courses so they can easily apply these processes later.

The changes to both tests are being made with an eye toward testing skills that are more transferable to college-level work rather than simply testing the ability to answer multiple-choice questions.

Look for more details on these changes, along with new practice tests and questions, to emerge later this year.

3. Retooled AP exams: For the 2014-2015 school year, significant changes will be made to two major AP subjects, physics and U.S. history.

The AP Physics B curriculum, which the National Research Council found to be too broad in its scope and too encouraging of cursory coverage, will be split into two entirely different exams. These exams will be titled AP Physics 1 and AP Physics 2 and will aim to encourage more in-depth studying of the concepts.

Similarly, the AP U.S. history exam will de-emphasize some historical periods and encourage teachers to delve further into methods of historical interpretation and analysis.

All of these changes are intended to make students think more, memorize less and be better prepared for college academics. Students and teachers alike must remember to adjust their preparation strategies to the new standards being assessed.

Bradford Holmes is a professional SAT and Latin tutor with Varsity Tutors. He earned his B.A. from Harvard University and his master’s degree from the University of Southern California.